We pursue a craft that takes so long, we get used to leaving half-finished pieces behind us and going on to something else. So today I would like to celebrate Irene’s completed tatting! It is 14 inches (36 cm) across, which means the final row alone was 44 inches! (112 cm)! long!

Congratulations, Irene on finishing this piece. It is a beautiful design that was part of a 14-day challenge on the Facebook page “Tat-a-Renda”.

A week ago, Barbara M. Underwood passed away. She was a teacher and author of several books on Bedfordshire Lace, and I thought that with this post, rather than running an obituary, I’d rather celebrate this lace and her contribution to it through my own (unfinished) learning story.

You’ve probably all seen some Beds, and I know that earlier this year some of our Club members were practicing some easier Beds pieces, because if the Getaway had gone ahead as planned, we’d all be there this weekend, taking Jean Leader’s class.

The first Underwood book that I got was this one, published by Ruth Bean in 1988:

Like many lacemakers, I fell in love with the “dress cap” (what a friend of mine calls a “head doily”) on the cover; inside there are many more pictures of some very complex patterns. As the cover promises, there were technique notes, but there were no cosy little easy patterns to gently lead a beginner into this lace. Bedfordshire doesn’t “do” thread diagrams – you mostly just get a pricking – and possibly a photo – with no directions. I would often sit in the evenings, poring over the pictures, trying to figure out how the lace was made. Somehow I thought that you made this lace entirely without adding or taking out pairs – I don’t know where I got that idea, but I believed it, and I was never able to figure out how to work it so that would be true. I decided anybody who could make Bedfordshire was either super-experienced or some kind of a witch, and set my book aside until I developed superpowers of my own.

Fortunately other lacemakers commented about the lack of introductory pieces, and in 1993, Ruth Bean published another Underwood book: 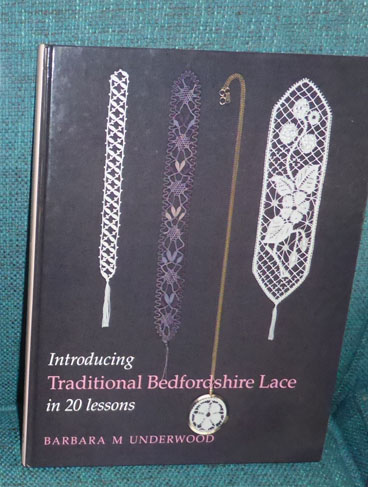 There were other Bedfordshire books – Pam Robinson’s “A Manual of Bedfordshire Lace” came out in 1979, and Margaret Turner’s “Bedfordshire Lace Patterns” in 1986. I’m sure there are more I don’t know about. But this second Underwood book was the first one I found that explained Bedfordshire in the simple but structured manner I needed.

This was the result: 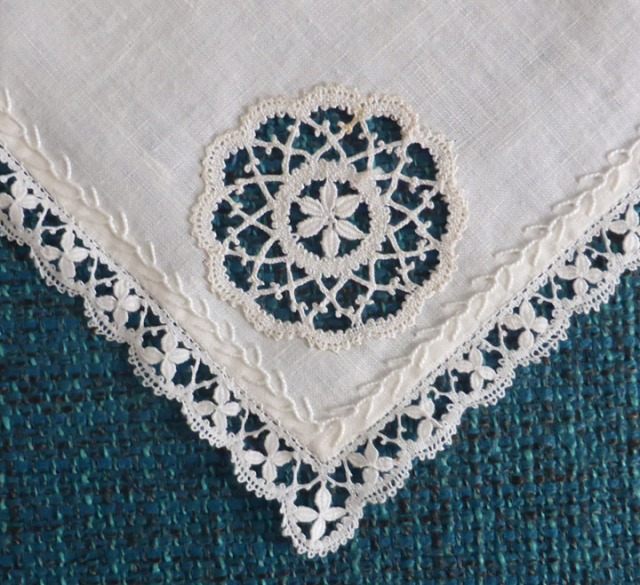 The edging is Pattern #4 from “20 Lessons”. I already had the roundel – made in a class at one of the Pacific Northwest Lace Conferences – and I inserted it into the handkerchief and added some Dorset Feather Stitching to finish it off. The embroidery stitch was recommended in one of the Bedfordshire books, as going well with Beds lace, and I think they’re right. It’s simple to do and really adds to the lushness of the finished piece.

I did go on to do some more small traditional Bedfordshire patterns: 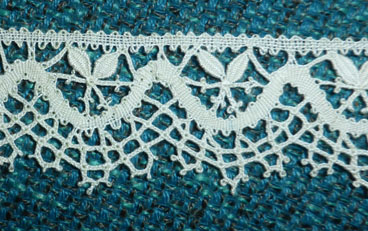 but then I caught sight of Lester Lace.

Thomas Lester (1791 – 1867) was a prominent lace designer and merchant, whose designs were displayed at the Great Exhibition at the Crystal Palace, London, in 1851. Many of his laces and patterns are held by the Cecil Higgins museum, and many patterns have been published, so they will not be lost to posterity. I had the opportunity to take a Lester Lace class from Holly van Sciver, where I tackled – and, after two years, finished – her Lester Cuff design:

Many people argue that this design isn’t exactly Bedfordshire, mainly because it has gimp around the smaller motifs. I’ve read discussion that suggests Lester Lace is where Bedfordshire and Floral Bucks mingle; that it’s not truly either one. There are lots of deep and complex Bedfordshire patterns, and lots of simple ones like the little edging I did for my handkerchief. But once you get into the swing of it (and are happy with your tallies – Beds has lots of tallies) it is very satisfying to make.

Thank you, Barbara Underwood, for the books and the teaching.

Hi Everybody – I hope everyone is well and enjoying the sunshine! I have some more lacey input for you:

First, Ruth has started making Bedfordshire lace. I love the way the colours are falling with this variegated thread:

Dianne is further along with her hex snowflake sampler:

Dianne tells me that the work is continuous – before you start you plot a path through the pattern, and the pairs are left behind and picked up later, rather than being ended and put in again, and you don’t have to sew in as you go. It is an interesting concept! The finished piece will be 42 cm (approx 16″) and she’s using 28/2 Aurifil cotton. As you can see, the pattern doesn’t have pinholes or thread paths or colours and is more of a guide than the type of pricking we’re used to; that is why I believe it is OK to show the partial pricking here. It is a course piece, and not yet published.

Spurred on by a Facebook post from the Exeter Museum, I’ve spent a couple of days looking up lace online. Here are some suggestions for things you might look at today:

Mrs. Treadwin’s Lace Book – In the mid-1800s Mrs. Treadwin was famous for her lace, and her short sample book (I think it’s 13 pages) has been digitized by the Exeter Museum. To open the book and turn the pages, you have to be hovering over the bottom right corner of the book or page (guess how long it took me to figure that out…no, it was longer than that)

Next, Julie has contributed a new video of fibre spinning and lacemaking in the Czech Republic. You can tell from the masks that it was just done a few days ago! There’s some speaking but mostly it’s just music and watching someone spin and there’s some good video of somebody making lace on a bolster pillow. I love the lacemaker’s hand-carved thread spool!

Now, I’m pretty sure they weren’t making lace with it, but did you know that they’ve discovered spun fibres from a 50,000 year old Neanderthal site? There’s a fascinating electron micrograph closeup of the 3-ply string in the article, which is here.

That’s it for now! It’s another beautiful day, and I must get out for my walk.

While we’re all staying healthy and indoors, I thought I’d provide you with a little more lace input:

First of all, some of us are finishing projects! Julie is just finishing this multicoloured iris, using Coats sewing thread (green) and Guterman quilting thread. The lace is done, but she is looking for a better bead to set off the iris centre.

Irene has been doing a 14-day tatting challenge by Tat-a-Renda. Here’s her project, with Day 9 complete:

and Irene has also completed this lovely star for the OIDFA project:

It looks to me like linen thread for the most part, with maybe a pearl cotton for the gold.

That’s it for our input of pics of finished lace. But it is Easter this weekend, and I have a little bunny pattern, that was put online for anyone to use. It looks pretty quick to make, and would be lovely in Easter colours. I’ve put the pattern in this post, but a printable version is also on our pattern page.

That’s it for this entry! I’ll be doing another one in a couple of weeks. If anybody has any lace to show off, do think about taking a picture and sending it to me. I have some good photo-editing software, so don’t worry about not having the right size or file type. If you can email it, I can deal with it.

Yesterday’s meeting was cancelled, but instead, here’s a virtual meeting with some eye candy:

A couple of our members have brought in some lace to share!

Irene has been tatting – this delightful little field of flowers was created as part of a fundraiser for the Palmetto Tatting Guild. They are made in size 20 thread.

I’ve been wrestling with my scarf project! The giant bolster pillow (19″ long, 10″ diameter)(48 cm x 24 cm) has accidentally been dumped to the floor twice, as I’m not used to working on something that can roll around! Plus you start out working sideways on the bolster, which has its own issues. But I’m still in there trying! The thread is Moravia linen, 2 strands together, and the pattern is from Ulrike Voelcker’s book, “Schal ohne fransen” (Scarf without fringe). 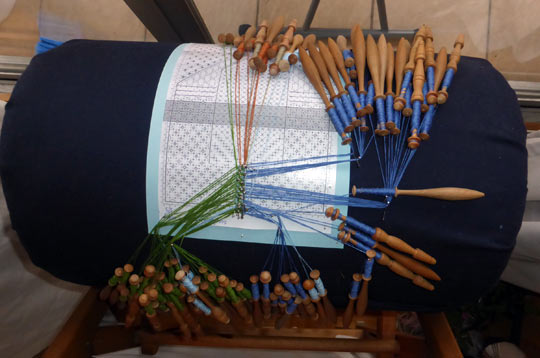 Next we have a contribution from Dianne, who recently took a course with Ulrike Voelcker, and is really happy with her progress on the snowflake hexagon sampler:

At every meeting, after we see one another’s project, we chat a bit, about what’s going on in the lacemaking world. We had a wonderful contribution from Julie, who reminded us of the wonderful sea urchin display in Singapore (you can read an article and see more pictures here )

And we have also picked up this item from the Kantcentrum, which has published a lace pattern for people to make while we’re all stuck at home! The working diagram and some instructions are on our Pattern page – note that to use the pricking with the suggested thread you will need to reduce the size to about 2.75 inches (7 cm) In this pattern the different colours refer to different stitches: I believe green is half stitch, blue/violet is cloth stitch, and red is whole stitch (C-T-C-T) – if you have different information, do let me know!

And that’s the end of the our virtual meeting! I hope you all had some fun!

After some discussions we’ve decided the Vancouver Lace Club won’t meet in March. These are the times we’re living in!

Yes, a meeting as small as ours isn’t prohibited, but some people would have to come on transit, which would increase their risk of infection, and just in general there was a feeling that people didn’t want to come. So after some discussion among the usual attendees,  we have cancelled the March meeting, and we will review the April meeting in a few weeks.

I would like to thank the organizers for all of the effort they have put into the Getaway so far. We are hoping that the event is only postponed, and that they will hold their Getaway next year – 2021 – instead.

Our lace club was scheduled to demonstrate tomorrow at Fibres West in Langley, but given the current situation, our members wisely decided not to attend. Lacemaking is something people need to get close to see, and spending the day with lots of strangers crowded up to the table and bending over us, just didn’t seem like a good idea.

While demonstrating, you’re seated, and at a lower level than the spectators – even if they would stand far away (which is unlikely), chances are any viruses would not have a chance to fall to the floor before they fell onto us and our lace pillows. So we cancelled, and a few hours later, the entire event was postponed.